How The Separation Of Church And State Affects Your Estate Plan 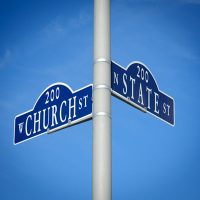 The First Amendment to the United States Constitution provides for the separation of church and state.  This means not only that the United States does not have an official state religion and that people are free to practice any religion or none at all, but also that the federal and state courts in the United States do not have the right to issue rulings on religious questions.  To do so would be to interfere with the autonomy of faith communities and their leaders.  Hypothetically, the court cannot rule on whether a church must recognize a couple’s marriage as valid or whether a Catholic priest was wearing the correct color of vestments at a Mass.  Meanwhile, Florida case law contained decisions where a court refused to rule on whether a certain packaged food met the requirements for kosher certification and a dispute about a seruv (a contempt of court order issued by a rabbinic court) against an Orthodox Jewish man who refused to divorce his wife.  If your wishes for the distribution of your estate or the final disposition of your remains are informed by your faith, you should be as specific as possible about this in your estate plan and include written statements from clergy if possible.  A Tampa estate planning attorney can help you with all the legal aspects of your estate plan.

Orna and her husband both wished to be buried in accordance with the customs prescribed by their Jewish faith.  Shortly before her husband died, Orna visited Menorah Gardens, a Jewish cemetery in Florida, and discussed burial plans for her husband.  The representative assured Orna that her husband would be buried in accordance with “Jewish burial customs and traditions.”  She trusted the cemetery to do this based on its website, her conversation with the representative, and the presence of Jewish religious symbols throughout the grounds.

The first time Orna visited her husband’s grave after he died, she noticed something surprising, namely that a Christian pastor was buried nearby, in the same section of the cemetery.  In her lawsuit against the cemetery, Orna alleged that this went against Jewish burial traditions; she claimed that Jewish and non-Jewish sections of a cemetery must have separate entrances and be separated by walls, fences, or hedges.  The defendants argued that, in some circumstances, Jewish law considers it acceptable to bury Jewish and non-Jewish people together in the same section of the cemetery.  The court dismissed the lawsuit, refusing to rule on a religious question such as Jewish burial practices, since this would violate the First Amendment.

Contact David Toback About Including Burial Plans in Your Estate Plan

Estate planning is not just about deciding who will inherit your money.  A Central Florida estate planning lawyer can help you plan for the final disposition of your remains and all other aspects of your estate plan.  Contact David Toback in Tampa, Florida to set up a consultation.

By David Toback | Posted on May 17, 2022
« Smartphone Apps Are For Estate Planning, Too
Employer-Provided Retirement Savings And Your Estate Plan »