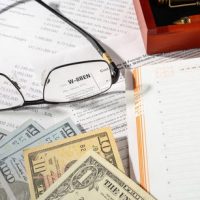 You may not have noticed, but when you buy something online, rarely is there a sales tax imposed the way there is when you buy something locally, at a brick-and-mortar store. You may be wondering why Uncle Sam doesn’t want its cut of those transactions. The answer lies in a 1992 Supreme Court decision, but before you start researching it, you may want to know that it may be about to be overturned.

The reason why taxes aren’t imposed in online transactions, is because of an arcane part of the constitution, the Interstate Commerce Clause. That clause has been interpreted to mean that states can’t pass laws that interfere with or restrict commerce between states. Only the feds can do that.

That means that unless an online retailer is physically headquartered in your state, no state can impose a sales tax on you for purchasing something from another state (that restriction applies to all transactions where the buyer and seller are in another state, not just online, but online is where the most interstate commerce happens nowadays).

It seems that states—specifically, South Dakota– want their part of the action. Likewise, brick-and-mortar stores are looking to even the playing field, seeing an unfair pricing advantage that online retailers have in not having to charge taxes.

South Dakota recently passed a law requiring all retailers pay a sales tax to it, so long as the retailers have over $100,000 in sales.

South Dakota immediately filed suit against numerous online retailers, asking the court to declare the tax constitutional. Citing to the prior Supreme Court decision, South Dakota’s highest court declared the tax unconstitutional, leading to an appeal to the U.S. Supreme Court, which has decided that it will hear the case and make a decision on the merits.

Opinion May Be That Taxes Should be Imposed

But many Supreme Court justices in other court decisions have questioned the logic in not allowing taxes to be collected. They, and lawmakers, note the budgetary shortfalls of many states, which could be cured by imposing sales taxes. They also note the restriction on interstate taxation especially hurts states like Florida and South Dakota, which imposes no state income tax.

Practically, proponents point out that online retailers have software allowing them to calculate sales taxes, and that the economy is much different now than it was in 1992 when interstate taxation by states was ruled unconstitutional.

Incidentally, for those wondering why Amazon charges sales taxes, it is because Amazon has buildings and fulfillment centers in almost every state. Thus, it opted to begin charging sales taxes a few years ago.

Keep your business in compliance with state and federal tax laws. Contact Tampa estate and tax attorney David Toback to discuss your tax issues or problems.