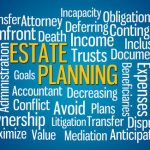 As people age or get ill, it is an unfortunate fact that mental ability starts to decline. In most cases, people may not be as sharp, but they will remain sharp enough to take care of their own affairs. But sometimes, whether due to injury or disease, the ability to make basic decisions about… Read More »

Out-of-State Trusts May Need to Be Revisited

Florida is a haven for incoming residents. Whether it’s young people coming to live on the water or retirees coming here to avoid the snow, Florida gets a lot of people moving here from other states. In many cases, those people may have executed trusts in the states that they left. When they come… Read More »

The United States Supreme Court has now legalized gay marriage. Aside from the emotional and societal impact of its decision, the decision also carries important ramifications when it comes to estate planning. However, because the decision is so new, many of the estate planning issues come in the form of questions, rather than answers…. Read More »