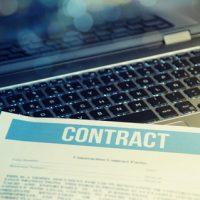 Every now and then there are cases that seem like they not only affect legal scholars, but also have a tangible, real world effect on everyday people.

Such was a recent case that determined that a loan modification was not a negotiable instrument, the way a promissory note is.

This is because most home mortgage loans are represented by what are known as negotiable instruments–contracts with special rules and particular legal definitions. An original of a negotiable instrument must be produced at court, and one of the reasons is to submit the note to the court so it’s not floating around the stream of commerce, being bought and sold even after it’s used to get a judgment.

There was long some confusion over whether the loan modification was the same as the original promissory note–that is, was the modification also a negotiable instrument? Did the original have to be submitted? What happens when a plaintiff/bank had an original home loan but just a copy of a modification?

A modification agreement simply was not the same thing as a negotiable instrument the way a home loan is, and thus, while the bank would have to prove its terms, the requirement that the exact original be filed was not necessary.

Remember that this case was in terms of a home loan. It may not have applicability in other areas, especially where parties modify a negotiable instrument by providing an amendment or modification which is also a negotiable instrument. Still, knowing the difference between both can help your business sue on debts that may be owed to them.

Do you have questions about contracts, agreements or loans, or enforcing your rights under a loan? Do you need loan agreements drafted or reviewed? Contact Tampa estate and tax attorney David Toback to discuss your business documents and enforcement rights.