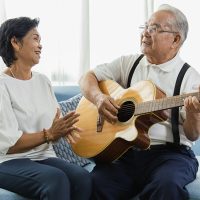 Ask anyone who met their spouse late in life, and they will tell you that over 50 is the best time to fall in love.  Late in life romance is all fun and no games.  When you put a ring on it after AARP newsletters start arriving in your mailbox, you have already made financial mistakes and learned from them; not only have you learned to manage money, but you have learned to manage emotions associated with money.  When you are young and your fiancé asks you to sign a prenup; it might make you trust him less; you might assume that he is doing it so that he can throw you out like yesterday’s trash when he meets someone younger and prettier.  For seniors, though, the main purpose of prenuptial agreements is to prevent probate disputes.  You have both acquired wealth through employment and inheritance, and you both have family members whom you want your estate to support.  Love is more beautiful when you are old, but stepfamily drama is equally ugly at every age.  If you signed a prenup before marrying your spouse, then this Valentine’s Day, you should review your prenup and make sure it does not contradict any estate planning documents you have executed since you got married.  A Tampa estate planning attorney can help you avoid any discrepancies.

When a Trust Contradicts the Prenuptial Agreement

Paul and Marilyn did not have children together, but Paul had a son named Gregory from his first marriage.  Before they married in 2011, Paul and Marilyn signed a prenuptial agreement.  One of its provisions was that both spouses waived their right to claim an elective share of the other’s estate.  Because Paul had descendants, Marilyn’s elective share would have been one third of the estate.

In 2013, Paul wrote a will.  It provided that one third of his estate should go into a trust with Marilyn as the beneficiary.  When Paul died in 2017, Gregory tried to stop the probate court from setting up the trust for Marilyn.  He claimed that Paul’s will could not give Marilyn her elective share after she had waived it in the couple’s prenup.  The court accepted Gregory’s arguments and did not give Marilyn the money.

The easiest solutions to this problem would need to have happened while Paul was alive.  The couple could have voided their prenup right before Paul signed his 2013 will.  Likewise, Paul could have set up a trust for Marilyn while he was alive; there are several ways he could have organized it so that she would start receiving money from the trust after he died.  Remember that reviewing your estate planning documents is an act of love.

A Central Florida estate planning lawyer can help you make corrections and revisions to your estate planning documents, so you can avoid disputes during probate.  Contact David Toback in Tampa, Florida to set up a consultation.

By David Toback | Posted on April 6, 2022
« Yes, Your Parents Can Disinherit You If You Don’t Pay Them Back
Ambiguous Marital Status Can Mess With Probate »